Why Dive in Ambon?

If you are an avid scuba diver, you may have already heard of Ambon Indonesia and the exceptional muck diving it offers.  Lembeh straight has reigned as the top muck diving destination in the world for nearly two decades, but with the recent discovery of a new anglerfish species (aka the psychedelic frogfish) in Ambon Bay, some would argue that diving in Ambon is equally deserving of the world-class title.

While popular scuba destinations such as Raja Ampat, Tulamben and Nusa Islands in Indonesia get far more media attention for the incredible marine biodiversity, Ambon should be on your radar if you love and enjoy critter hunting!

In this post, you will learn the “where what and how” of Ambon, how to best dive the region, and tips on how you can create the best scuba diving trip to this spectacular macro heaven.

What is muck diving anyway?

Muck diving is essentially diving in shallow depth, slowly and patiently, over sediment of black sand.  Muck dive sites are sometimes covered by fish carcasses, trash, tires, or old fishing equipment (lines and lures).  The visibility generally tends to be poor, but it can be as clear as 10-15m in good conditions.

If you’re wondering why in the world anyone would want to go scuba diving under such conditions, it’s because the most uniquely disguised and fascinating critters live in these habitats!

I remember when I dived in Anilao Philippines for some muck diving, one of the best dives of my life was at a site called the “fish market,” which was exactly that – a pier off of a local fish market where the underwater world was filled with fish bones, rotten food, plastic bags, candy wrappers, diapers, and other man-made trash.   That dive site provided non-stop action with some of the most interesting creatures I had ever seen.

But not all divers are into muck diving.  I have met plenty of experienced divers who’d much rather see bigger creatures in the open sea such as manta rays, whales, and sharks.

Muck diving is a special type of scuba diving that is addictive to those who enjoy hunting, exploring, and getting rewarded with a special discovery.

For me, the joy is in seeing a life that I have never encountered before.

Some of my highlight encounters while diving in Ambon are: 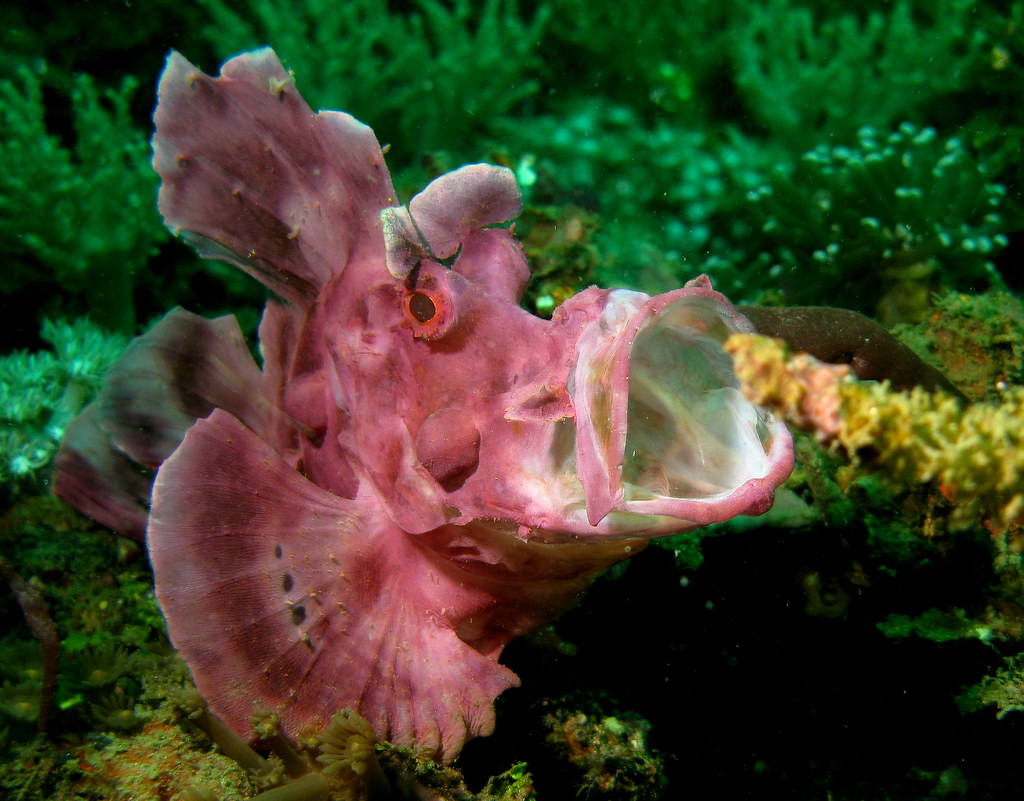 Due to the dive area and environment (mostly sediments), muck diving requires an excellent buoyancy control.  You will need to be very comfortable with frog-kicking, otherwise you will stir up the sediments, cause poor visibility and most certainly make your dive buddies upset!

Ambon Island is a part of the Maluku archipelago located in eastern Indonesia.

To get to Ambon, you can fly directly on domestic flights from within Indonesia including Jakarta, Surabaya, Sorong, and Makassar.   If you are flying from Bali, you would need to connect through Makassar.

If flying internationally to Ambon, best connections are via Singapore, Kuala Lumpur, or Jakarta.

What to Do in Ambon

The vast majority of the tourism in Ambon is related to diving.  And since most of the visitors are either on dive resorts are under water, you will rarely see foreigners out and about around the island.

On land, there are a handful of published activities you can do such as visit a waterfall, the Netsepa beach, the eel pond, and historical points of interests.

We took a day off to do a “day tour” to see the recommended topside attractions, and we were not overly impressed.

The Netsepa beach was ok – if you have been to other remote islands of Indonesia (or in SE Asia), Netsepa beach is not anything special.   The water was turquoise was but not particularly clear.   It was also more of a “family attraction,” rather than a peaceful and relaxing beach getaway.

But one thing you MUST try is rujak in Ambon!

Along the beach by Netsepa, several stands sell rujak, which is slices of fruit served with a sweet & spicy peanut sauce which they make fresh on the spot!   And no matter where else you buy rujak in Indonesia, it never tastes quite as good as the one in Ambon!  Make sure you try one 😉

There is a shopping center called Ambon City Center (ACC) with an attached movie theatre.  If you are ever in need of something to buy or entertainment, the mall is your go-to.

Best Time to Dive in Ambon

Due to the monsoon season in June, July, and August, some of the dive centers on Ambon Island close operation during this time.   Check with the individual operator to confirm their schedule.

Aside from these few months, Ambon’s temperature is quite steady throughout the year and optimal for diving with an average underwater temperature of about 27C (80F).

On the Ambon Island, a couple of reputable dive centers cater to macro enthusiasts.  We dived with Maluku Divers in 2017 but sadly, the resort has closed since then.

This resort is located along the Ambon Bay, which means phenomenal critter life is only a stone throw away!

There are no rooms at Bluemotion, but they can refer you to nearby accommodations that are basic but comfortable.

They have diving gear for rent, but since the majority of the guests are experienced divers who travel with their own equipment, their supply is limited.   Make sure you check in advance with the operator.

Dive into Ambon (DIA) is a dive shop run by Barb and Kaj out of the Maluku Resort and Spa.  This resort and dive shop is located along the Baguala Bay, about 30-40 minute’s drive from the Ambon’s International Airport.

While the resort is located on the “other side” of Ambon Bay, DIA runs two boats: one usually heads to Ambon Bay for muck diving and the other remains in Baguala Bay for reef diving.

After spending a few days diving in Ambon Bay, my dive buddies and I dived with DIA for a few additional days, curious to see what the reef and coral life is like around Ambon.

Overall, our reviews of Ambon’s reef were average for this part of the world.   If you are keen on reef diving, you can find more colorful and vibrant corals in northern Sulawesi, Komodo and Raja Ampat.

Disclaimer:  we are dive professionals who dived in the Coral Triangle for years – so our standard for “quality” diving is probably a bit higher than average.

Our conclusion:  go to Ambon for the muck diving.   Macro life was without question, world-class.  We would recommend Ambon in a heartbeat to anyone who loves hunting for the smallest critters!

Contrary to what we are taught in our recreational and professional scuba dive training of NOT touching marine life, all the dive guides we dived with touched marine life A LOT.   From grabbing the hard corals with their hands, scraping soft corals with their pointers to “hooking” a frogfish, we saw some abhorrent diving behaviors.

As dive professionals, we understand that guides have a desire to please their guests.  We also understand that muck diving may require some “poking around” to find the well-disguised creatures.

However, it was still a disappointing part of diving in Ambon for us.

Insider’s Tip: Some of the Ambon dive sites (particularly Laha 1, 2, and 3) are prone to quite a strong current, even in shallow depths of 5-10m.
Be prepared to get some exercise when diving in Ambon 😉

In addition to land-based operations, you also have an option to go diving in Ambon with liveaboards.

What better way to hit the best of Indonesia’s diving destinations by joining a dive cruise?!

Liveaboard cruises to Ambon are seasonal and limited to a few trips a year, so check the schedules well in advance as they book fast!

Read: Everything You Need to Know about Liveaboard Diving

Tips for Planning a Liveaboard Trip:

If you are a fan of muck diving and critter hunting, diving in Ambon is, without a doubt, one of the most exciting and rewarding experiences in Indonesia.   But if you are into macro diving without the muck, you may consider alternative destinations in Indonesia such as Alor, Raja Ampat, and Komodo for some incredible macro life.

Have you found fabulous macro life in Indonesia?   Share in the comments below!

Found it helpful? PIN it!

This post contains affiliate links, which means that if you make a purchase using the link in this post, I get paid a small commission at absolutely no cost to you (yay for you and me!).

5 Top Nusa Lembongan Beaches With the Most Epic Views

Best Spas in Ubud That Will Leave You on Cloud Nine

Hi there! I'm Mo, a former New Yorker turned mermaid, who is obsessed with coconuts, scuba diving and ice cream :) Click on my photo to learn how I traded my business suit for a bathing suit to pursue a life of fulfillment, and created a life in paradise!

A Gift for You